Dave Thornton
Supported by: 5 Comedians from the Festival

Dave Thornton has built a global reputation for his honest, engaging, whip-smart and damn funny comedy.

Dave’s TV credentials include hosting a series Channel 9’s 20 to 1, appearances ABC TV’s Spicks and Specks and Agony Uncles, Network Ten’s Hughesy We Have a Problem and regular appearances as a co-host on The Project.

He’s even tried his hand at acting, appearing in Channel Nine’s House Husbands and ABC TV’s Upper Middle Bogan. If there’s catering, Dave will be there.

Dave spent four years co-hosting Fox FM’s breakfast radio show alongside his good friend Fifi Box which he decided to wrap up in 2017.

In 2018, Dave hosted the first series of AFL quiz show The Beep Test on Fox Footy, a format developed by fellow comedian Michael Chamberlin, which returned for a second season in 2019

Dave toured Australia in 2019 with his brand-new hour long show Lean Into It selling out around the country securing a reputation as one of our country’s funniest. 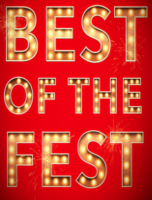