Nazeem Hussain
Supported by: 5 Comedians from the Festival

Nazeem Hussain has fast become one of the most in-demand TV and Radio personalities in Australia.

His new TV show ‘Orange is The New Brown’ will premiere on Channel 7 in 2018!

He has just filmed his debut Netflix stand up special – ‘Nazeem Hussain: Public Frenemy’ at the Just For Laughs Festival in Montreal, to be streamed worldwide in 2019.

Nazeem is best known as the star and creator of the critically acclaimed TV show, ‘Legally Brown’, airing for two seasons on SBS in 2013 & 2014. The show broke ground with it’s boundary-pushing content, received wide spread critical acclaim and was nominated for Most Outstanding Comedy at the 2015 Logie Awards. 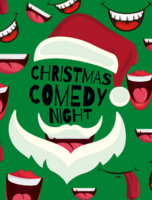