Randy Feltface
Supported by: 5 Comedians from the Festival

Randy joined forces with skinny man Sammy J to create Ricketts Lane, which won Best Show at the Melbourne International Comedy Festival and went on to become a television series of the same name, airing on ABC TV in Australia, Seeso in the US and Netflix in the UK. Randy's role in Sammy J & Randy in Ricketts Lane earned him an ACTAA nomination for best performer in a comedy series in 2015, the first non-human performer to be recognised in this category.

Between occasional guest appearances on Australian light-entertainment television programs, Randy has spent a significant amount of time writing and touring with his musical partner in crime, Sammy J. Together they have hosted the Melbourne International Comedy Festival Gala, appeared on Good News World, Q&A and The Project, written and toured live shows such as Bin Night, The Inheritance and Sammy J and Randy Land, performed a few times at The Sydney Opera House, released an album and a couple of DVDs, been nominated for two ARIAs and featured on the Neil Patrick Harris Gala at the 2015 Montreal Just For Laughs Festival.

Randy’s most recent live special The Book Of Randicus is due for release in 2019 and he was most recently spotted on NBC’s Bring The Funny, where he was seen gesticulating wildly in a checked shirt. 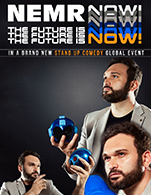